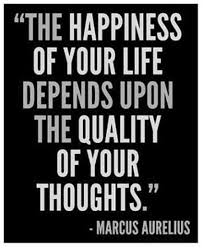 “Watch your thoughts, they become your actions,

Watch your actions, they become your habits,

Watch your habits, they become your character,

Watch your character, they become your DESTINY ! “

Our mental health is influenced and governed by the richness of our thoughts. Negative repetitive thinking may cause depression, anxiety, and a lot of different disorders, even it increases the death risk as much as 94 % ( Ref. British Medical Journal). Mental health is defined as a state of well-being in which every individual realizes his or her own potential, can cope with the normal stresses of life, can work productively and fruitfully, and is able to make a contribution to her or his community ( World Health Organization ). Mental health is all about your cognitive, emotional, and social behavior. The major source of mental state issues is allowing negativity in one’s owns life.

This analogy gives us an idea of positive and negative thoughts and their influence and effects on our routine life. Thus by harboring negative and imbalanced thoughts one unknowingly and psychologically start moving towards the backward direction and his or her mental health starts weakening and degenerating. The affected individual does not find anything encouraging, engaging, inspiring, and motivating. He or she becomes a victim of skepticism, cynicism, pessimism, and eventually turns from a normal individual to a mentally ill health patient leading to misery and in many cases death.

A study shows that mental health going to be a major disease burden by the year 2030. The American Journal of Psychiatry studied and proved that people with bad mental condition earned 40 % less than others and thereby impacting productivity and financial stability. The great American journalist, author, and professor Norman Cousins once said – “The tragedy of life is not death, but what we let die inside of us while we live.”

“ Man is his own friend’. In the sixth chapter of The Bhagavad Gita, Lord Sri Krishna teaches Arjuna the truth ‘ Let a man lift himself by his self; let him not degrade himself; for he himself is his friend and he himself is his enemy’.

When a person is undaunted by circumstances, he becomes his own friend. It is said that when a piece of steel is magnetized, t is capable of lifting about twelve times its weight. When demagnetized it can’t even pick up a pin. It is the same with the mind. If it is out of all negativity and impurity the mental health remains fit and man can do wonders.

Advising Remarks – There are a lot of things people think, chase, or tries to change which is beyond control, and eventually on failure morale goes down and mental state may get altered. This is a common incident across society. In order to manage such unproductive activities thousands of years ago, the Serenity prayer was introduced which says – “God grant me the serenity to accept the things that I can’t change, the courage to change the things that I can and wisdom to understand what I can change and what I can’t change”. So, Now on ….

Will you be the controller of your Quality Thoughts and want to take positive actions today ? If the Answer is Yes, Suggested Readings

Sanitation and Hygiene: Not an Option but a Compulsion